The Dvergar of the Far South, descended from dwarves who emerged from tunnels there long ago, are sometimes referred to as Sandvergar or "Desert Dwarves." By the people of the Far South, however, they are called Besak-ha (singular Besak), essentially meaning "those derived from Bes." The people of Kemhet have embraced them, for they ride on mounts that look like the sacred scarab beetle. Having lived long under the blazing sun, most have darker skin and hair than their northern cousins. They are often hired as household guards by the local Kemheti population, who have adopted the dwarven ancestor-god of their clan, Bes, into the Kemheti pantheon. 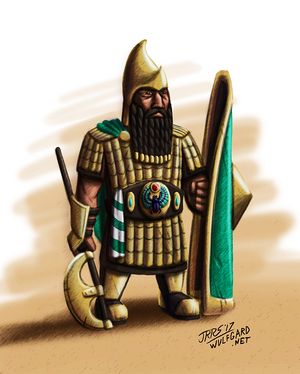 A desert dwarf in armor.

Desert dwarves have been much more exposed to the sun than most of their kin over the centuries, and as such, have acquired a darker average skin tone. They usually have dark hair as well, which they braid and decorate in a combination of their own cultural styles and those of the Khemheti people. Since they spend more time in the saddle atop their Khepridnir than other dwarves, many of them tend to be bow-legged.

While most 'desert dwarves' stick to their own settlements usually located in the rocky desert cliffs, they regularly interact with human society, and many dwell in human cities. The people of Kemhet often hire them as household guards, and large estates may have a whole family of dwarf servants living and working on their land. The dwarves have adapted well to the culture of Kemhet, and they now make fine armor in the Kemheti style, which is worn both by their own warriors and those human soldiers who can afford it.

The clan of dwarves that first settled in Kemhet had a chief ancestral god who was adopted into the Kemheti pantheon as Bes, a dwarf god of protection, along with his wife Besset, who is associated with the family and childbirth. The dwarves of Kemhet have embraced these Kemheti versions of their ancestral gods, along with other Kemheti gods such as Khepri, Ptah, and Thoth. The gods of Northrim are not regularly worshipped by the dwarves of Kemhet.