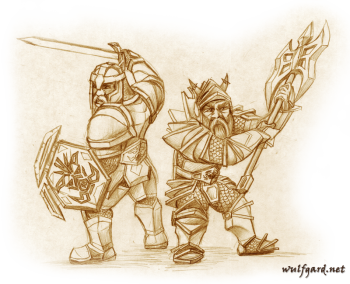 Dwarves of different clans fighting alongside each other.
The Dvergar, or dwarves, are a short race with a broad-shouldered and stocky physique. An ancient and immortal race, they are found throughout the mortal realms.

According to the dwarves themselves, and most Nordlings, the dwarves were the very first race created by the gods - formed from the earth (the flesh of Ymir, though some say the dwarves began as maggots in his flesh) and given life by the gods. The first dwarf was Mótsognir, greatest of all dwarves. Second was Durinn, the Sleeper, who it is said will reawaken near the end-times to lead his people. Many more dwarves followed, shaping great halls and great statues that were eventually given life by the gods to become many different races of earth, possibly including mankind. Many of these ancient, creator-dwarves are thought to still dwell deep, deep inside the core of the earth, and they are revered as gods by the current dwarves.

From these ancient, primordial dwarves, a group broke away, heading toward the surface world, to live closer to the sky. These were Dvalinn and his sons. They created the great dwarf-halls of Auravangar and Iorovell. They became the dwarf races known today, especially the Mountain Dwarves. All modern dwarves are "sons of Dvalinn." The current King of the Dwarves, recognized by most clans, is Lofar, a son of Dvalinn, whose name means Law.

Dwarves stand around half as high as the average man, and they usually have thick beards, heavy brows, and relatively large noses. Most dwarf clans put great value in their beards, and traditional dwarven societies judge an individual by the length, thickness, and neatness of his beard, even using terms like “shortbeard” for younger individuals and “longbeard” for clan elders.

Most humans view dwarves as ugly, short-tempered, stuffy, and stubborn. These are common dwarf personality traits, but so are loyalty, honesty, and steadfast (even hard-headed) determination. It is also a mistake to assume that dwarves are “fat” because of their short and broad physique. If an individual makes the mistake of mentioning this in the presence of a dwarf, they might just learn the hard way that most dwarves are made almost entirely of muscle.

Dwarves are considered a magical race because of their innate connection to the elements of earth and fire, and their knowledge of ancient runes. This adds to the humans' mistrust of them. Their home realm is Nidavellir, where they build great underground cities and ride Khepridnir beetle mounts.

Of all the magical races, the dwarves probably have the most dealings with humans, since men place great value in the gold, gems, and metals they mine and craft. Dwarves are exceptionally skilled craftsmen, and legend has it that the Aesir gifted them with all their power of craftsmanship upon their creation. They are masters at forging from the rarest of metals that they mine deep within the earth, such as Deepsilver, Deepgold, and Void Iron. They guard their trade secrets closely and have a reputation for greed because they value their merchandise so highly. They have a very powerful trading guild on the surface called the Iron Gauntlet.

For a list of the dwarven races, see Category:Dwarves.