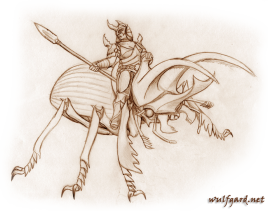 Dwarf Beetle-Rider
Khepridnir (singular Khepridin) are giant, usually subterranean beetles that are raised and used as mounts by dwarves. Although many consider them magical beasts, they are not capable of speech and are - aside from their size - like ordinary animals.

Khepridnir lay their eggs on balls of refuse. The eggs then hatch into grubs averaging about three feet in length. The grubs vary in color, but most are pale yellow. Some are luminescent. The dwarves feed them a slop of refuse, not unlike the swine raised by farmers on the surface. Since the grubs are plentiful, some are butchered for meat. The meat of a Kepridin grub is easy to cook and very filling, though many say it is an acquired taste.

Eventually the grubs build a hard cocoon of rocks and dirt, and later emerge as an adult khepridin. There are many different types of khepridnir, varying greatly in size, shape, color, and variety of horns. Some have specialized limbs for digging, so the dwarves use them in carving tunnels. All are strong and extremely tough, covered in a shell of armor that cannot be pierced by most blades or arrows. Indeed, their shells are often used for making suits of armor. Although their eyesight is poor, they have an excellent sense of smell and can feel vibrations in the earth, allowing them to be aware of danger before even the dwarves have detected it. They are also amazing climbers and can crawl along the walls of caves, and even fly short distances.

In all types of khepridnir, the male ("bull") has extremely large horns or mandibles, which he uses to fight other males over a female ("sow"). Since they are stronger and more aggressive, the males are most often used as battle-mounts for dwarven cavalry. Female Khepridnir are more docile and are often used as pack animals, though they are seldom ridden on the surface, where their senses are less effective and they tend to frighten surface-dwelling races. The females are also better diggers, using their specialized forelegs to dig tunnels and aid delving teams.

Legend has it that the dwarves were created by the Aesir from the maggots tunneling through the corpse of Ymir, the primordial frost giant whose body formed the mortal realm. While some dwarves choose to deny the legend that they were once maggots themselves, others accept it, treating the khepridnir and their grubs as sacred brethren. The smaller types, too small to ride, are sometimes kept as pets. A few are named after the gods, such as the lovely red Freyja Bug and the sturdy Thor Beetle.

Scarab beetles are sacred to the Kemheti people because of their association with Ra, the rising sun, and the cycle of death and rebirth. When the people of Khemhet saw dwarven explorers riding giant scarabs, they welcomed them with open arms. The existence of Desert Dwarf society today undoubtedly owes a lot to these beetles, and the dwarves gave them their current name - khepridin - in honor of the Khemheti scarab-beetle god Khepri. Due to the desert dwarves' exceptional mastery of breeding and training khepridin, the name has gained popularity even among other dwarf races.