This article is a stub. You can help Wulfgard Wiki by expanding it. 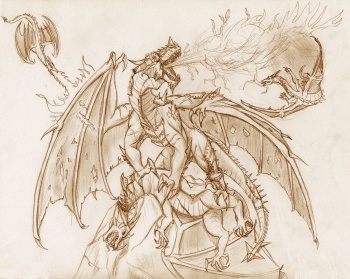 Sturmkrag battling a trio of much younger dragons.

Sturmkrag (sometimes Stormkrag) is an ancient dragon dwelling in the volcano called Vulcan's forge in the Jagged Edge. Enormous and powerful, he is called "the Scourge of Midgard."

Tales of Sturmkrag, going by any of a dozen different names, appear throughout the known world, where he is always described the same: a huge ashen-black dragon, breathing clouds of fire, red lightning, and smoke that cover the land in destruction. Numerous heroes, giants, and even other dragons have tried to conquer him, sometimes doing grievous damage to him, but he always wins or escapes. The ultimate survivor, his hide is marked with scars and even metal patches welded over old wounds. He has only one red-orange eye, the other lost long ago in battle, and his tail is tipped with an enormous spear-headed, spiked mace. He is the most feared dragon still living in the mortal realm.