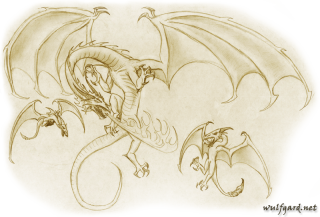 A wyrm fighting a pair of wyverns.

Mysterious, noble, but terribly fearsome, dragons are another of the most powerful creatures in the mortal realm. Known by many names, such as wurms or wyrms and drakes, dragons are highly intelligent, winged creatures magical in nature and capable of speech. They are said to be immortal. They grow to enormous sizes, though begin life quite small, hatching from an egg. Despite their size, they are almost never seen by Men. Some say they can fly between the realms, and this is one reason why we do not often see them. This article is primarily excerpts from Midgard's Noblest Beasts, by an anonymous monk of Astra Aeterna.

The appearance of dragons varies wildly, but all true dragons have two wings and four legs and scales. Some dragons may appear more serpentine, and others bulkier and bearing more spikes. Some legends claim there are dragons of even wilder appearances over the mountains of the Jagged Edge, in the fabled Eastern lands. Dragons range in every color imaginable, from deep blacks to bright reds. Some are dull, while others shimmer like polished armor. Why dragons appear in so many colors and what bearing this may or may not have upon their abilities is unknown.

Perhaps the most famous aspect of dragons is their fire breath. All dragons can breathe fire from their throats, and some can breathe many different types of arcane flame. Dragons breed in the mortal realm but may spend most of their time in various elemental realms, such as those of fire and ice. All dragons can fly, but many prefer to swim or to burrow underground. Dragon scales are some of the most valuable items in the world for their exquisite beauty, toughness, and resistance to all elements.

Among their many unknown magical abilities, dragons supposedly bear the power to assume the form of man, elf, dwarf, or perhaps other beings. In such a form, they may interact with Men for unknown reasons. Some of the oldest and noblest houses in the Empire boast draconic heritage, such as the House of Draculea, the House of Ysauria, and the House of Drake. Some dispute the truth of claims that dragons are a part of certain bloodlines, but it is generally accepted as an important part of Imperial history.

Some dragons pillage, stealing gold from cities and towns to hoard in their caves high in the Jagged Edge. Others are said to be benevolent, protecting lands from evils such as orcs and serving as guardians of ancient forests, but these tales are ancient and may not be true. Dragons will protect whatever they value with incredible ferocity. Dragons behave this way for their eggs, their territory, their gold, or all of these things. Most dragons have a hoard of gold and jewels that they value above all else. A dragon will know if even a single coin is misplaced from their treasure. Most are evil and destructive, coveting nothing more than immeasurable wealth, which they hoard away for themselves. If a dragon feels truly threatened, it may begin devouring its riches to keep them from the hands of Men. Dragons are extremely vain and proud, considering themselves to be superior to all other beings.

Dragons are considered to be invincible. Other dragons and giants are two of the only beings capable of slaying them. Men and elves and dwarves do not often slay dragons. Dwarves, however, are said to know secrets to dragonslaying that no other culture can boast. All materials of a dragon are valuable alchemical ingredients, including their bones and blood. When a dragon first bleeds, their blood is hot as magma. Dragon scale armor is valued beyond estimation, but it is nearly impossible to acquire through any means. 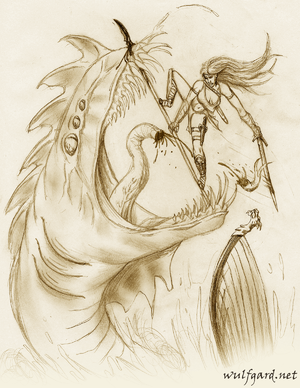 A hero battles a sea serpent.

Lesser dragons - sometimes called pseudodragons or dragon-kin - are creatures draconic in appearance but lacking most of the intelligence and power of true dragons. Such creatures include wyverns, basilisks, lindwurms, cockatrices, and sea serpents.

There are many famous dragons of myth and legend, such as Typhon, whom Zeus cast into the yawning void of Tartarus, and Typhon’s bride, Echidna, as well as the Nordlings’ tales of Nidhoggr, who gnaws on the roots of the world-tree Yggdrasil. The Nordlings write also of Fafnir, slain by the hero Sigurd, and of Jormundgandr, the World Serpent that wraps around the world. In the Jagged Edge, there is said to be a city of dragons named Voc, ruled by a mighty dragon god known as the Nameless One, with shimmering silver scales. Likewise, another truly ancient dragon dwells alone in the Jagged Edge: Sturmkrag, the Scourge of Midgard, who dwells in the volcano Vulcan’s Forge at the foot of Mount Olympos.

Two mighty dragons live outside the reach of the Jagged Edge, as well: Gronvaenga, the Guardian of Mimiriholt, one of the most ancient dragons still to live. Even today, she maintains the borders of the eternal forest and slays any who dare to attempt defiling those ancient trees. She is said to be friends of the elves that dwell there also. All woodcutters fear the shadow of her green wings, after which the Nordlings named her.

Within the borders of our own Empire, however, we may be best acquainted with the dragon Rognosst, worshipped by the reptilian beastfolk within Rognosst Swamp in the Northwest. He is said to be a mighty black dragon that frequently receives living sacrifices from his beastfolk minions.

While the Venatori do answer the call to hunt dragons if necessary, no outcry about a dragon has actually been true for hundreds of years. Most dragon sightings are wyverns or fires.