From Wulfgard Wiki
(Redirected from Werewolves)
Jump to: navigation, search

A pack of werewolves showing two of their different forms.

Among the most feared of all monsters are shapeshifting beasts of emptiness and desolation, their howls heard by the full moon. This horror goes by many different names, but perhaps it is best known as the werewolf or the lycanthrope. Not much is known of them, and they are incredibly rare, so much of the information included here could also be taken as speculation, as the levels of their power and the unpredictability and degree of their transformations have yet to be fully understood.

This article is taken from an ancient text, Of Man-Beasts and Those That Eat Human Flesh, by an unknown author.

There exist many terms for the monstrous werewolf. Such terms, from all across the lands, include werewolf, wolf-man, lycanthrope, lykanthropos or lycanthropos, plural lykanthropoi; this is an Old Achaean form, garwal or garwalf, varulfr or simply varulf, vǎrkolak, and garou. Although some may have previously been used to refer to a variety of shapeshifters, some terms now refer only to werewolves today, such as versipellis in High Imperial, hamrammr in Nordling tongues, and eigi einhamir also in Nordling tongues.

Cursed to become a monster by the whims of the moon, or - some say - the whims of their own hunger or rage, werewolves are capable of untold slaughter. They live among men, wearing their false human skin. But when the full moon rises, they are overtaken by their true nature, and they devour all in their path. Those whom they do not maul, they often swallow whole and even alive, so desperate is their gluttony. Their hunger is impossible to sate, and they will eat in a single night as many men as they can find.

Some werewolves, it is said, can pass their curse on to others through a bite. Surviving the attack of a werewolf, however, is very unlikely. Should someone survive a werewolf’s bite, they may become a werewolf themselves on the next full moon.

They have many powers in addition to their shape-changing, such as being impossible to kill and healing from all wounds. It is impossible to tell whether a man is a werewolf by merely seeing their human shape, though it is said their eyes may appear brighter than an ordinary man’s. Like many monsters, the only way to possibly kill a werewolf is with silver, one of the weakest metals. This is perhaps why werewolves seem invincible. Even with silver, a mortal blow must still be struck.

Some say that these man-beasts do not recall the atrocities committed while in their monstrous form. They awaken in the morning ignorant of their crimes. Thus, they continue their ordinary lives and trick those around them with their human appearance, instilling undue trust and behaving as though their soul has not been devoured and replaced by a wrathful beast. In spite of this, they are human no more, and they cannot be trusted; a werewolf will do whatever is necessary to preserve its own life, including lie. This leads to question whether the claims are true that they retain no memory of their transformations.

Werewolves are capable of many types of transformations. While they generally appear as men and behave as such, they may also gain animal features such as claws, sharp teeth, and some fur. On the full moon, they become much like wolves but with some attributes of men such as hands and arms, capable of performing actions as a man would. This is their greatest and largest form, much larger than any man and even most other monsters. Some werewolves may even take the shape of giant wolves, some the size of horses. Werewolves of all shapes may easily outrun the best of steeds. They are the fastest of beasts and never tire. They can leap city walls in a single bound, as they can jump so high one might think they had wings. They can communicate with others of their own kind without using words like men.

The eyes of werewolves are sometimes said to glow like lanterns in the night. The truthfulness of this is disputed, for they are also known for their ability to come unseen upon their prey. In spite of their size, they are capable of making hardly a sound. They leave no tracks and have no distinctive scent. It is impossible to track a werewolf. They retain the intelligence of a man even when they become beasts and are overtaken by their rage. They are the ultimate predator. They may snarl, growl, roar, or howl, but they cannot speak like a man when they are in their bestial form.

There are many legendary werewolves of which we still tell tales, in particular the Six, also known as the Lords of the Werewolves. They are impossible to slay and have devoured legions of the Empire’s Venatori. They are capable even of using magic, able to summon fire and ice and shadow and to bend the spirits of nature to their will. 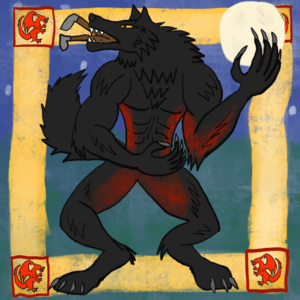 The Beast of Illikon devouring a man whole.

An addition by Zacynthos of Arcadia, author and compiler of Emperor Doraius I's The Imperial Bestiary:

Very recently, the city of Illikon came under siege by barbarians from Northrim, and one of the most heroic knights of the Northwest became a great werewolf of black and crimson. The Beast of Illikon, as the monster has thus been named, decimated the attacking armies with its insatiable bloodlust. With a howl, it summoned the aid of many other werewolves and wolves, sparking transformations and thus loyalty even among the enemy, creating its own army of wolf-beasts.

Breaking the siege and escaping the city, this terrible werewolf now roams the land. Lycanthropy has once again returned to the Empire, perhaps greater than ever before. Whereas, in the past, what few werewolves remained in the world hid or fled into the wilderness, werewolves inspired by the Beast of Illikon now bravely arise to take their hunger and rage out upon innocents.

Dear reader, please do not imagine the act of hunting a werewolf. Though the Venatori are now few in number, it is a job for which only they are capable, and it will otherwise end only in death.