Whisper is a young orphan elf who grew up on the streets of Coronaria, stealing to survive. She was found and briefly trained by the Silent Messengers, but escaped, only to later be captured by Daemonique while she and the Messengers were working for Septimus Plutarch.

Whisper does not know the details of her birth or her real name, only that she grew up in a small orphanage attached to a Temple of Artemis in Coronaria. One day, some Knights Templar came for her, planning to take her back to her people, the elves. Fearing being cast into the unknown, she decided to stick with the familiar by running away. After that, she grew up on the streets of the Iron Ring, stealing to survive. She came to know Coronaria like the back of her hand, affectionately calling it - as many of the lower-class residents did - simply "the City." She never left its walls.

One day, she and her friend Shade were captured by the Silent Messengers (including Hanan al-Saffah), to be trained along with many other orphans and street urchins, and tested to see who among them would make worthy assassins. When Whisper figured out the true identity of the group, she quickly made her escape and even led the city guards back to their hidden lair. The guards and soldiers broke into the building and freed the children, but the assassins managed to escape, informing all the trainees that they had failed and would never see them again. For this, Shade angrily rebuked his friend Whisper and fled the City to look for the Messengers and rejoin them. Whisper informed him that she would never tolerate assassins in her City.

Years later, Whisper heard rumors that the Messengers were once again in Coronaria, so she went to their new hideout to investigate. She was caught by Daemonique, a servant of Plutarch, who had hired the Messengers for a job. Hanan wanted to kill her, but Daemonique bargained for her life, apparently hoping to keep her like a pet. Whisper then joined Plutarch's group in search of a set of ancient artifacts. 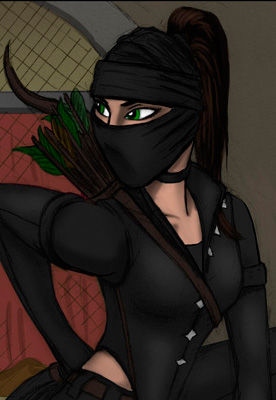 Whisper fleeing Daemonique's room at the Temple of the Southron Death-Gods in Coronaria's Iron Ring.

Despite being forced to scrape a desperate living on the streets, Whisper has never become so jaded as to lose her personal, unwritten ideals. She seldom compromises these values, only stealing from those who can afford it, and helping others whenever possible. But she usually does so from the shadows, seldom interacting with people and almost never speaking, hence her name. Small, lithe, and graceful, she is an excellent climber and escape artist, with excellent vision and hearing, and a skilled shot with a bow.

Whisper is a main character of Into the North and is the protagonist of her short story Speak No Evil.