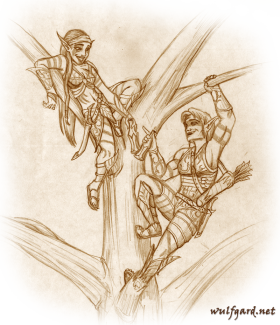 Perhaps the wildest and least “civilized” of the elves, wood elves (vidralfar), also called "low elves" or "grey elves," are less devout and civilized than their Ljosalfar cousins. They are perhaps the most nimble of all elves, climbing from tree to tree and using their bows with great skill. They also have been said to dabble in strange shamanic rituals and darker arcane magics that would be shunned by the Ljosalfar.

Wood elves are, on average, a few inches shorter than most humans. Their skin is light, and their hair is typically brown, in shades ranging from light "dirty blond" to black, though a few are lighter and are of stranger hues. Their eyes are usually bright green, hazel, or brown, though lighter eyes are not unknown. Adapted to a wilder and more nocturnal lifestyle, Vidralfar have significantly longer and more pointed ears than light elves, and they also have generally more acute senses.

Wood elves have a chaotic lifestyle, often moving from place to place, sometimes hunting nocturnally, sometimes active in the day. They are hunter-gatherers more than farmers, and are not above stealing from others - usually human caravans or settlements - for more exotic wares. They still engage in trade, however, with humans and other elves from time to time, usually bartering with furs, berries, wines, rare herbs, leather goods, and finely-made wooden crafts, including bows, arrows, and spears. The wood elven tribes very seldom engage in real warfare, and almost never with each other. Most forgive and forget quite easily, preferring to give and receive gifts rather than harbor grudges. They celebrate a plethora of holidays long into the night, and sometimes their laughter and songs can be heard throughout the forest, although their camps are seldom seen, and the revelers can disappear in an instant if disturbed.

Despite this penchant for revelry, their attitude can turn deadly serious when they believe their people or their homes are threatened. They care nothing for "honorable" battle, resorting to traps and ambushes. Using their mastery of stealth, they may lead an enemy into favorable terrain, trap them, and rain poisoned arrows on their heads from the shadows. Perhaps worst of all, it is said that many tribes care little if their magi resort to shadow magic and even some forms of necromancy.

Most Vidralfar worship the Vanir, but some are said to turn to "dark trickster gods" and perform strange shamanic rituals deep in their forests. They are masters of the druidic and shamanic arts, and nearly all wood elves learn to communicate with beasts at a young age. Many tribes have patron animal spirits in lieu of traditional gods. Some of these deities may even be descended from the old gods of the Shifters. At least, this is what many say, perhaps in order to darken the wood elves' reputation.