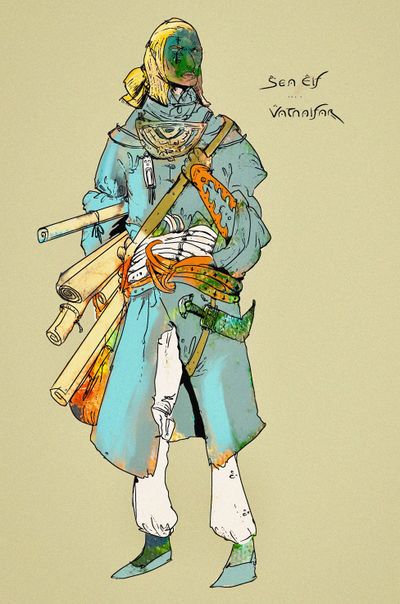 The sea elves or water elves (vatnalfar) go by many names in many places. The Achaeans and Southrons often confuse them with sirens, since they have enchanting songs that can lure hypnotized sailors to their doom on sharp sea rocks. Although some sea elves are malevolent, but most merely wish to defend their territory from intrusion by foreign invaders and meddlers. Despite their ability to remain beneath the waves for a seemingly indefinite amount of time, they do not have gills, and must occasionally surface for air, unlike their merfolk neighbors.

Sea elves are about the same height as Achaean humans. They are very vibrantly colored and appear far stranger than most other elven races, what with their almost endless variety of hair colors (green, blue, red, black, blonde, or brown). Their eyes are usually blue, green, or grey: the colors of the sea. Their skin is often light and like that of a Western human's, but some have very oddly-tinted skin such as bright blue, turquoise, or grey, and some sea elves that dwell in marshy areas and riverbeds have greenish skin.

Sea elves are as reclusive as dark elves, and they are nearly as malevolent from a human point of view, due to their tendency to wreck any ships that approach their islands. In reality, they simply want to be left alone. They live in harmony with the sea and its creatures, and they will defend sea life - such as a pod of whales - from hunters with deadly force. Some dwell in coral cities that stretch from rocky sea caves to underwater gorges, partially above and partially below the waves. They have good relations with their neighbors, the merfolk, although the two races are not related.

They favor the Nordic god of the sea, Njord, but due to their relationship with the Poseidon-worshiping merfolk, they occasionally worship the Imperial sea-god as well, along with other minor water-related deities.