From Wulfgard Wiki
Jump to: navigation, search
Sir Thomakos "Tom" Drake, Dragon-Blooded, knight and Demon Slayer of Illikon is an Achaean knight of Illikon with an infamous reputation. Tom leads a mostly ordinary life, unaware of the dark destiny that awaits him: a destiny that will threaten to tear apart worlds both mortal and immortal.

Tom Drake was born the bastard son of a noble knight of the Drake family and a barbarian woman he met on a campaign into Northrim. Tom was returned to Illikon as an infant and raised in an orphanage until around age seven, at which point he ran away and began living on his own in the city streets. He scraped by using his agility and cunning, often stealing to survive, and he became adept at evading those who might seek to catch him. At last, he was taken in by Warren Drake, patron of the House of Draconius, who is technically Tom's uncle. Warren kept him first as a mere servant boy to run errands, but Tom soon became Warren's page, and then his squire, much to the chagrin of other nobles. When Warren began training the boy and saw his talent for battle, he adopted Tom as the only son and youngest child of the Draconius family. This raised a controversy that has never truly faded, what with Tom's illegitimate birth, as well as his spitfire personality and rebellious nature that persist even today. Unlike most squires, Drake was knighted when he was younger than twenty-one due to displays of heroism (during events in The Hunt Never Ends), causing further controversy. Now that he is a knight, he is not often seen without his faithful stallion, Ghost. He earned his title of Demon Slayer after achieving what almost no mortal man can boast: he slew a demon. An incredibly powerful demon, Vaal, had somehow crossed over to the mortal realm - but after much struggle, Tom alone slew him and sent him back from whence he came. Since then, Tom's name has only spread further across all of the Northwest, loved by some and hated by most.

Tall, with broad shoulders, a lean but muscular and toned physique, and a very handsome face to match, Tom makes an excellent 'knight in shining armor' – at least in the physical sense. He has an aquiline Imperial nose, high cheekbones, and dark, low-set eyebrows that accentuate his slim eyes. His dark brown hair is very short and extremely spiked, and his eyes are bright green with distinct yellow like flame about his pupils. A deep scar is cut into his left forehead, extending upward a short ways to interrupt his hairline, and he has plenty more scars on his often bare arms to match.

Tom's combat armor shows off his physique, as it is modeled after that of an ancient Achaean hoplite: his breastplate is sleeveless and form-fitting, bearing the design of a muscular chest, as well as the golden Imperial crown flanked by a pair of his blood red heraldic dragons. He is rarely seen without his dual, matching swords sheathed in an X across his back, and he always wears his amulet: a small, silver heraldic dragon.

Chaotic at heart and with a dislike for most governments and rules, Tom is wildly unpredictable. He holds little loyalty toward the Empire as a whole, but he is fiercely protective of both Illikon and the few people he calls friends. Tom has earned an infamous reputation among his fellow nobles for many reasons, as they call him - among other things - cocky, smart-mouthed, rebellious, disrespectful, extremely temperamental, persistently wise-cracking, and a "filthy street-rat bastard." He doesn't deny all of these. He speaks like a commoner and swears often, even going so far as to swear in multiple languages, for which he has also gained a reputation in the court for having a foul mouth.

With his heart set on upholding honor, Tom never lies and is quick to defend those who cannot defend themselves. His personality, however, often get in the way of upholding every aspect of the code of chivalry - particularly his being a ladies-man. He never seems to shut up, with the ability to find humor in even the most dangerous or absurd situations, as well as a habit of talking to himself and taunting his enemies in battle. Most of all, however, his temper is so volatile and so incredibly violent that he has become known as vicious toward his enemies. His rage on par with that of berserkers has led to many wild stories - not all of which are untrue. However, underneath all this sarcasm, arrogance (on the outside, at least), and rebelliousness, Drake is a good person who - more often than not - is out to do the right thing... even if he is very adept at getting into things over his head. 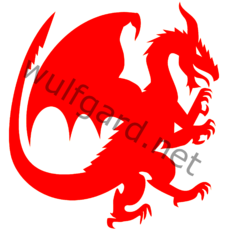 Red dragon emblem of the House of Drake.

Although Tom is the illegitimate son of a Draconius and a barbarian woman, he has been fully adopted into the Draconius family as the heir of the house, and thus has taken up their last name and heraldry. The Draconius heraldic animal is a segreant red dragon: a dragon standing on its hind legs with both forelegs raised and its wings spread behind it. Their heraldic colors are red, gold, and white. Tom displays the heraldry of the Drake family with pride on all his suits of armor. His jousting armor in particular is covered in dragon designs, and his helm is modeled after a dragon head. Last but not least, he always wears a small, silver amulet of his family's heraldic dragon. His family bears a true draconic lineage, with pureblooded red dragons in their ancestry, and this is something Tom carries with pride. 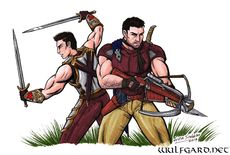 Tom Drake is the protagonist of the primary series of Wulfgard novels, The Prophecy of the Six, including Knightfall, and he has appeared in many stories besides, including The Hunt Never Ends, serving as narrator for the story "The Troll Toll" as well as taking a leading role in "Waking the Dragon" parts 1 and 2.