The Wanderer - known in various places under such names as Stígander (in Northrim), Hawk (by Jörgen), Peregrine (in the Achaean Empire), Deoradh (by the Alfar), Takanome (in the Far East), and more - is an outlaw from Northrim who, after being captured by the Achaean Empire while searching for his missing wife, ended up roaming around most of the known world.

The details of Stígander's early life are largely unknown. He was born somewhere in Northrim, most likely near the Imperial border. A natural loner, he never associated strongly with any one tribe, leaving his exact heritage a mystery. For most of his youth, he wandered the forests as a woodsman, hunting and helping to provide for his family.

At a young age, he joined a band of rebels called the Wolfpack along with his sister Magnhild. He quickly became the de-facto "leader" of the organization due to his skill in planning and setting up ambushes. During this time, he claims to have met and fallen in love with a beautiful woman, who one day mysteriously disappeared from the cabin he had built for them in the woods. She left no trace of her existence behind, disappearing even from the memories of everyone who had known her. Most of Stígander's friends questioned whether she had ever existed in the first place. Distraught, he eventually left the Wolfpack to wander in search of his lost love.

Although he intended to return eventually, Stígander's plans were forced to change when he was caught by Imperials while wandering in the Empire. He was sold as a slave to fight in the gladiator games, and when he finally escaped, he found himself much farther south than when he he started - deep in Deshret, in fact. So instead of going back the way he came and risking capture again, he decided to risk a journey through the Blasted Wastes, into the Far East, and eventually back across the Jagged Edge into Northrim again. Against all odds, he somehow made it, returning home over a year after his capture.

Quiet and aloof, grim and sardonic, and with a dry sense of humor, Stígander has never been particularly good at making friends. But those few who can claim to be close to him know him to be among the truest and most loyal friends they have, for he holds fast to his personal sense of honor. Although never formally trained in combat, life has forced him to learn how to fight and survive - the latter of which is his greatest skill, and the thing he takes pride in above all else. He has weathered more hardships than most men can imagine, without ever giving up.

Stígander is a main character of Into the North and is mentioned in many other stories. 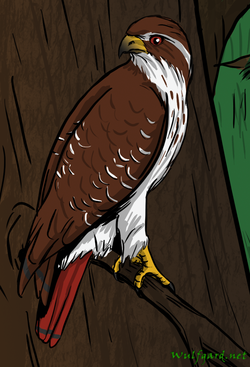