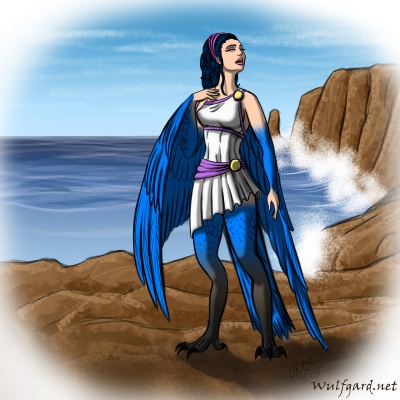 Sirens are beastfolk with the head, body, and hands of a human, but the legs, tail, and winged arms of a bird. Thought to be related to songbirds, they have voices so beautiful that their songs can mystify other creatures into a hypnotic daze.

Sirens are often confused for various other creatures, including harpies or sea elves, for their appearance and their song, respectively. However, sirens are related to neither demons nor elves, but the ancient and long-forgotten shifters, like the avians. Specifically, they were probably related to songbirds. However, when they were cursed to become beastfolk, they took on a more literal half-man, half-beast shape, much like centaurs or satyrs. Sirens have feathered, bird-like legs, tails, and winged arms, but the rest of their body - namely their torso and head - are human. Their feathers come in a wide variety of colors and patterns, including shades of brown, grey, white, and black, as well as bright reds, blues, and golds, sometimes solid-colored or sometimes in various patterns. Their hair color often matches their feathers, so their hair is frequently a bright color as well.

Sirens often dwell by the sea and on remote islands, which causes some sailors to mix up tales of sirens and sea elves, for both have enchanting songs and may live near one another. Using their songs, sirens can charm other beings into a stupor. They make liberal use of this ability in order to defend their homeland, but sometimes it occurs without them even meaning to, as they often sing to each other, or even alone, as a part of their culture. Like most creatures and especially most beastfolk, they simply want to be left alone. Though most now live on islands at sea, some dwell high in the mountains or deep within forests in many different lands.