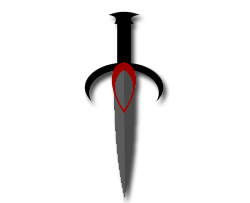 Signature dagger of the Silent Messengers

The Silent Messengers are the largest and most feared group of assassins west of the Jagged Edge. Working for the highest bidder, they are hired by their employers to "send a message" against their enemies, leaving their ebony dagger as a calling card at the site of every kill.

No one knows how the organization known as the Silent Messengers was born, except that it happened somewhere in Deshret. The Messengers never advertise or seek out potential clients. Instead, they wait. They have an extensive spy network that feeds them information either out of fear or in exchange for gold or favors, and through this network they hear about potential jobs. Some say they augment this network with magical scrying as well. Once they hear a whisper that someone wishes to hire them, they find that person and discover why. So all it takes to contact the Messengers is a whisper in the right ear.

It is unknown how many Messengers there are, but they seem to have eyes and ears in every city in Deshret, Kemhet, Parsanshar, Achaea, and even a few in Northrim. Though local governments have tried repeatedly to root them out and destroy them, they are masters of secrecy, willing to sacrifice their members' lives to keep their brotherhood hidden and protected. One reason for this loyalty is that many of the Messengers are outcasts from society, and the brotherhood is the only home they have ever known. This type of member appeals to the Messengers for their loyalty. If a Messenger disobeys orders or tries to leave the group, they will be killed. They do not suffer traitors or independent meddlers who get in their way. All independent assassins know to steer very clear of the Messengers and their targets.

The Messengers are allowed to use whatever weapons and armor suits the situation and their own unique style. The one standardized part of their uniform is a dark, blood red cloak with a long, low-hanging hood, but this is only worn during meetings and ceremonies.

New recruits are usually taken in at a young age so that they can be thoroughly trained, and raised to think of the Messengers as their family. These young men and women are usually outcasts, and are accepted regardless of race, creed, or birth. All that is required is the physical and mental wellness required to perform the job of an assassin. They are given one chance to refuse membership, but if they join, it is for life. New recruits are then sent to the nearest secret hideout, where they are trained by the elder assassins until they are ready to enter the field as an apprentice to a veteran assassin.

The ranks are as follows:

Veteran assassins who survive long enough may retire from killing to the role of Elder, to work on organizational aspects like choosing which contracts to accept, dictating prices, assigning jobs to individual assassins, and the like. They hold regular meetings in their hidden stronghold somewhere in Deshret to ensure that the entire organization is operating efficiently and according to the rules.

Master assassins are the leaders of a local stronghold. They are elected by the group upon the death of the previous Master, and may be of any age, so a Veteran or an Elder could be elected into the position.

The Messengers have few rules. They include the following: