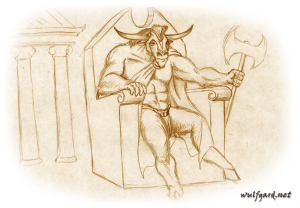 A minotaur lord on his throne.
Taurians (also called minotaurs) are among the largest and most powerful of beastfolk. Unlike many other kinds of beastfolk, most all taurians live in a great empire with a society not too different from that of Achaeans. Taurians are most commonly found in the Southwestern Wilds of the Achaean Empire, although smaller groups of them sometimes wander other areas, along with some different types of taurians living in other regions, who do not ever call themselves "minotaurs." It is only those taurians of the Minoan Empire, also called the Minoan Alliance, who willingly undertake this title. Minotaurs have a strong sense of civilization and honor, and many of them view other beastfolk as primitive and divided - which they are. It is the goal of minotaurs to create a mighty empire in which their kind and other beastfolk can live peacefully. 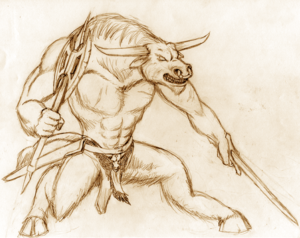 A minotaur warrior.
Although there are many different kinds of taurians scattered across the mortal realm, by far the most well-known and most common kind are the taurians of the West, which resemble great auroch bulls and cows. Regardless, all taurians share a common appearance akin to most beastfolk: the head, legs, and tail of a taurian are those of a bull, while their torsos, arms, and hands are like those of men. They stand considerably taller than humans, and male taurians have enormous horns that come in a variety of appearances. All taurians are covered in fur like that of cattle, which comes in various shades of brown, black, grey, or white. Male taurians are capable of growing beards, though not mustaches, but this is often only seen in the very old.

In ages past, the human King Minos was the leader of Knossos. It was an ancient Achaean city, grand and prosperous, partially thanks to the alliance Minos made with all taurian kind. Taurians served as guardians of the city, and Minos even gave passage to taurians from the mainland so they could dwell peacefully in Knossos, where they were accepted and even respected, unlike in all other human civilizations. Over time, however, tensions grew between the humans and the taurians - or "minotaurs," as they now called themselves, meaning "bulls of Minos." After Minos's death, the humans rose up against their minotaur guardians, calling them monsters and growing suspicious of them and their ways, particularly since the rest of Achaea viewed their civilization as primitive and heretical for harboring such creatures. The minotaurs were too many and far too strong at this point, however, and they crushed the human civilization that once sheltered them. But their respect for King Minos lived on, and they did not cast off their title of "Minotaurs." Soon, some taurians even began to revere Minos as a sort of god. Today, Achaeans know a different story of Minos that casts him in a light preferable to their civilization, in which he entrapped minotaurs within great labyrinths and hunted them like the beasts the Empire sees them to be. While Minos did originally erect labyrinths to shelter the minotaurs until he revealed his truce with them to all of Knossos, the story is nonetheless twisted. Today, only the minotaurs remember King Minos as he truly was.

The majority of taurians live on the isle of Knossos off the coast of Achaea, but there are many dwelling within the Southwestern Wilds as well, and a few smaller communities that live elsewhere entirely. The minotaurs that live on Knossos and in the Southwestern Wilds have built a mighty empire based upon that of ancient Achaea. Many of them worship Minos as their patron deity, and temples are built in his honor. Their architecture is intricate, with great columns and articulate carvings and statues. Females often do not serve as warriors, instead attending to children and the home; however, female minotaurs are not without social power, and there are many females among the Minotaur Emperor's personal council. Females are greatly respected and are seen as the highest authorities in terms of home and the family, and to disrespect a female is a terrible crime in minotaur society. In times of great need, female minotaurs may also be called upon to fight.

Knossos and its settlements in the Southwestern Wilds are ruled by a great minotaur emperor not unlike that of the Achaean Empire. He has absolute power but he nonetheless takes council with the wisest and oldest of minotaur sages and scholars.

Lords are directly below the Emperor on the social scale and need only answer to him when it comes to ruling over their personal territory. Minotaur lords are stationed at each individual fort in the Southwestern Wilds, and they often name this fort after their particular people or family, which misleads some humans into believing that minotaurs are still divided into tribes. Minotaur lords often lead their armies into battle, as they would not be fit to lead if they were not only wise, but also strong and brave, as all of these qualities are admired among their folk.