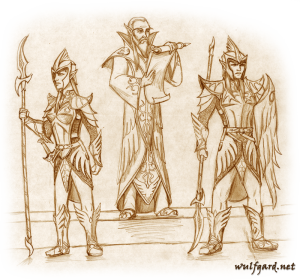 Ljosalfar - Light Elves
The “purest” of the Alfar races, Ljosalfar (also called light elves, high elves, or sun elves) were some of the first beings created by the Vanir, the old fertility gods and goddesses of the North. Beautiful, immortal, and devout, most consider themselves superior to other beings who walk the mortal realm... which, perhaps, they are.

Light elves are about the same height as Achaean humans. Their hair is typically golden, though it ranges toward red or brown in some individuals, and their eyes are nearly always bright blue or green. Very rarely, their hair may be black. Their skin is light and their features are beauitful and chiseled.

Ljosalfar consider themselves closer to the gods than to mortals, and most men who are given the honor of entering their wondrous hidden cities seem to agree. All of their cities are concealed deep in the largest forests, built into immense trees or mountainsides, from which they look down on all other races, including other elves. Very few are allowed to enter these cities, but the ljosalfar do sometimes send out envoys to other cultures to keep peace, as they feel that a certain balance must be maintained in the world. Based on these beliefs, the ljosalfar created the Longstriders.

Light elves are the most religious of the elves and very close to the Vanir. Their chief gods are Freyr and Freyja, though they worship all of the Vanir.