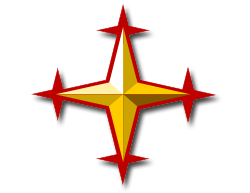 Emblem of the Knights Templar

The Knights Templar are an order of knights who follow Astra Aeterna and keep the peace between the Olympian temples, while also serving as the temples' personal army. They control the Achaean city of Templaria.

When a temple to the Cult of Astra was constructed in the ancient city of Templaria, it came under attack from the older, more respected Olympian temples in the city. Some followers of Astra were forced to take up arms to defend themselves and their brethren. As the cult began to grow more popular and gain more respect in Achaea, especially after the reign of Emperor Aurelius I, these Olympian temples began to look to the Knights of Astra to settle disputes between them, since followers of Astra represented a strong but impartial, neutral force in the city. They also started to help the legion defend the city. For these services, they were richly rewarded by the wealthier temples. They became the Knights Templar.

The Knights Templar are warrior-priests dedicated not only to keeping peace between the temples, but to rooting out and destroying all evil. Their primary enemies are demons, necromancers, and the undead. Wielding the "light of Astra," as they put it, they are extremely effective against these monsters which fear holy light. They often use their great wealth to clad themselves in rare, expensive arms, including deepgold or deepsilver armor and weapons. Their symbol is a gold four-pointed star of Astra, outlined in red, on a field of white.

Unlike most followers of Astra, the Knights Templar have amassed great wealth. They are, in fact, the wealthiest of the knightly orders, since all of the temples pay them tribute. Most Achaean cities have at least a small Templar presence, and the large ones are usually home to a Templar stronghold. Due to their great wealth and level of respect among holy men, the Knights Templar enjoy a large amount of influence in many circles of Imperial government.

Templar do not follow the orders of the Olympian priests. They are not allowed to take sides in disputes between temples, at least not until they have consulted the local chapter leader, usually the Knight Captain. He may bring important issues to his superior, the local Knight Commander in the largest nearby stronghold. The leader of all the Knights Templar is the Grand Master, elected by the Knights Commander in the Templar headquarters in Templaria.