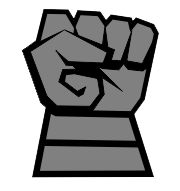 The Iron Gauntlet existed as a dwarven trading guild for years, but it was not until the founding of the Imperial Inquisition that it rose to its current level of power. Durand du Vide purchased his original set of void iron armor from the Gauntlet, and when the Inquisition was established, he returned to them for more. Soon their business was thriving, and they began establishing trade centers in any Achaean city that would have them, and in Northrim as well.

The Gauntlet consists of two groups: the Merchants and the Enforcers. The Merchants purchase rare dwarven metals and crafts from dwarven traders and craftsmen, then distribute them to human nations on the surface. Dwarves who try to trade directly with the humans are often driven out of business. All purchasers and sellers must "run the Gauntlet," as it is called, in order to buy and sell dwarven materials and crafts. The Enforcers help make sure this is the case, guarding shipments and occasionally coercing merchants into complying with the guild.

Though the universal emblem of the guild is a black gauntleted hand on a field of silver, merchants often use a variation with an open palm bearing a gold coin, while enforcers use the same gauntlet curled into a fist.

The guild's headquarters is located at Dvaergarn Gate in Northrim, but they have offices throughout Northrim and the Empire, including the Iron Pikes.