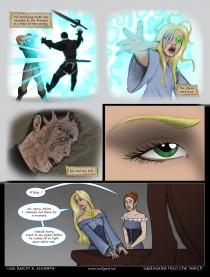 A page from Into the North.

Wulfgard: Into the North is a story currently being written by Justin R. R. Stebbins, to eventually be published as a comic book and/or novel. The first draft of the first two chapters have been posted on Saber-Scorpion's Lair as a webcomic.

The story concerns four different groups of characters and alternates between their points of view. These characters are the Northmen (including The Wanderer, the Wolf-Girl, and Jörgen), the Assassins (including Lord Plutarch, Minion, Daemonique, Al-Saffah, Whisper, Kye, and Isra), the Imperials (including the Skiera family and others), and the Dwarves (including Vegnar, Dabfrag, Bommlech, and Siddo'ak). Their paths eventually cross, however, for their fates are intertwined...

Into the North is a working title, which may change in the future.