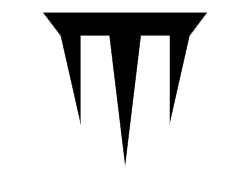 The Void Iron Bars - Symbol of the Inquisition

The Inquisition is an organization dedicated to hunting down and either imprisoning or killing those born with magical power. Operating out of their island fortress of Karak du Vide , they use the magic-resistant metal called void iron and the art of Channeling to fight magi, who they believe posess too much power for a mere mortal and present a danger to all those around them.

Created after the downfall of the hated Mage-Emperor Ildrius, the sole purpose of the Inquisition is to segregate or purge magic users from society. They view magic as a disruptive and dangerous curse that brings only chaos, calamity, and unspeakable horror into the world. What a mage would call "the Gift," an Inquisitor calls "the Condition" - they view magical aptitude as a birth defect from which certain individuals sadly suffer. These individuals can still live out productive lives, but they must be kept locked away from normal civilizations and kept under vigilant watch at all times. If not, they could use their powers to summon demons, infiltrate palaces and assassinate kings, twist the minds of the masses, or simply wreak havoc and destruction for their own purposes. Those who will not submit to confinement... must be destroyed.

Though sometimes called the Imperial Inquisition, the Inquisitors are not part of the Imperial military proper, though they do receive funding and support from the Achaean Empire. Nevertheless, they sometimes operate in Northrim and parts of the South as well, especially if the locals there hire them to take care of a mage problem. This happens fairly often, since the Inquisitors are well-known to be the masters of mage hunting.

The goal of the Inquisition is to keep the magically-gifted under control and away from society without resorting to unnecessarily cruel and often wrongful executions like stake-burnings, and to study magic in order to better understand these individuals. However, not all Inquisitors live up to these lofty ideals.

When the Inquisitors find a suspected mage, they first attempt to confirm his magical nature. They ask locals about his activities and attempt to coerce him into doing some kind of spell that will incriminate him. If no evidence can be found, they are required by Imperial law to release the suspect. The Inquisitors have long searched for a way to simply 'detect' magic within someone, but only other magi can sense such talent, and the Inquisitors are reluctant to bring even the most loyally converted magi along on their hunts. If there is ample evidence to convict someone as a mage, the accused can be taken to a Tribunal, where it will be decided whether he should be imprisoned and branded with the Mark, or executed. If any mage is witnessed casting a spell in the eyes of an Inquisitor and at least two others, then the Mark of the Condition is branded onto his skin - usually on the arm or chest - and he is locked away from society forever. Those magi who have also committed heinous crimes are simply executed.

If they are forced to fight a skilled mage, the Inquisitors will use all anti-magic tools at their disposal. Inquisitors are armed with extremely rare void iron weapons and armor, which makes them nearly immune to magic. They have other ways of fighting spellcasters as well (see the Classes section below). Once the mage is captured, he is bound in void iron cuffs that prevent him from casting spells, and usually locked in a void iron cage. Void iron is so precious to the Inquisition - providing them with their main advantage - that if any void iron item is lost, it becomes their mission to recover it. No one outside the Inquisition is allowed to carry void iron weapons or armor branded with the Bars, lest they incur the wrath of the Inquisitors. They posess the largest armory of void iron weapons outside of the deep dwarves who mine it. Most Inquisitor arms and armor are, in fact, forged by and purchased from dwarves, usually through the Iron Gauntlet.

Mages captured by the Inquisition are brought to their island stronghold south of Artorius: Karak du Vide, the Castle of the Void. Once a prison colony of the Empire, it was dedicated to mage-prisoners some time after the formation of the Inquisition. Since then, it has developed into an intimidating, angular black fortress surrounding the entire island commune. Few have ever seen what lies behind those black walls and returned to speak of it, save Imperial inspectors and the Inquisitors themselves.

Karak du Vide is divided into several main sections. Within the walls is the village, a community in which peaceful mages are allowed to interact and live out their lives so long as they do not cast any disruptive spells. This community actually works as an incentive; some mages have willingly turned themselves in to the Inquisition just to live there with others who share their gift. The walls, towers, and the main keep belong to the Inquisitors themselves. They have their own barracks, library, temple, stables, docks, etc. - a self-sustaining community that also supports the village. Under the castle lies the dungeon, which consists of several sections as well: the prison section, for mages who refuse to live by the rules of the village community and thus have to be segregated from it... and the lower dungeon, where extremely dangerous mages are kept in solitary confinement, and sometimes, it is said, are subjected to strange experiments as the Inquisitors try to better understand the nature of magic.

The Inquisitors have thus built up the largest storehouse of Arcane knowledge to exist anywhere outside of the secret mage tower in the Jagged Edge. Very, very few are allowed access to it besides the Inquisitors themselves.

Finally, it is noteworthy that the Inquisition only has jurisdiction over human mages. Though there are some elves, dwarves, and other creatures imprisoned in their island stronghold, non-humans are usually deported back to their homelands... or simply executed, especially if their kin do not want them back. The Inquisitors also have nothing to do with monsters, like orcs, lycanthropes, beastfolk, vampires, etc. They are only interested in magical humans, leaving monsters to the various monster hunters, such as the Venatori.

The workers of the Inquisition, the Mundane are separated from the Magic-users because they do not bear the Mark burned into their skin. Trained and equipped to resist magical influence but not necessarily to do battle, they take care of the menial tasks around the island fortress. Many of them work on the island for several months at a time before returning to their actual homes in Templaria, the Moor, Deltalund, or other coastal cities. Very few reside on the island itself permanently, since most common folk are terrified of the place.

The standard inquistor class, sometimes called an Agent. Inquisitors are trained to know all the signs of a magic-user, to resist magical influence, and to wield every possible weapon against magic, including runes, void iron, and sometimes holy wards (for fighting demonic magic) - and of course the use of their prized void iron arms and armor. The standard inquisitor outfit consists of a suit of void iron chainmail, gauntlets, and boots, with a void iron mask over the face, and a black hooded tabard bearing the Triple Bars of the Inquisition.

The Inquisition's muscle, Ebonguards wear uniforms of full void iron plate armor, which covers every possible inch of their body. They are trained in battling the most common magical attacks, wielding void iron melee weapons, as well as crossbows that fire void iron bolts for fighting from a distance. Though not as knowledgable as the Inquisitors whom they usually protect, they are highly skilled fighters, feared by all mages.

The other secret weapon of the Inquisition, besides void iron, is the art of magic channeling. Channelers, unlike other Inquisitors, cannot wear void iron armor. Their abilities rely on the magic runes either painted or tattooed along their arms and sometimes the rest of their body (usually accompanied by an Inquisitor mark painted over the eyes on their face). Through the power of these runes, they are able to absorb the spells cast by a mage and channel them back, sometimes reshaping them in the process. If the Channeler tries to take in too much magic, however, their runes may actually break down, causing extreme pain and burn wounds. The Inquisitors have developed the art of Channeling via runes through their contact with the dwarves who forge their void iron, and through their own experiments. They do not share the secret with others.

Only those Inquisitors who have proven themselves loyal, intelligent, and knowledgeable in the workings of magic are promoted to this rank. When an Inqusitor reaches this rank, he or she usually remains in the fortress overseeing the general operations of the Inquisition, rather than working in the field. However, they often take command personally on important Inquisitions. They elect and advise the Grand Master Inquisitor.

Equivalent to the Inquisitor 'class.' Inquisitors are educated in the ways of magic and may judge whether there is enough evidence to bring a mage to a tribunal. They also have the right to brand a mage on the spot if they witness him casting a spell in the presence of at least two others who can back up their claim. Many who hold this rank are Channelers, though most prefer to simply use void iron weapons.

The rank of soldiers who are loyal to the Inquisition but do not have the knowledge and experience necessary for the rank of Inquisitor. All Ebonguards are of the Enforcer rank.