The symbol of the Hidden.

The Mage-Emperor Ildrius, a black mage and leader of the cult of the Hidden, ruled the Achaean Empire in a reign of terror for ninteen years, amplifying the Achaeans' fear and hatred of all things magical. His death resulted in the creation of the Inquisition to keep magi under control.

In the year 250 of the Imperial calendar, after the short reigns of Xandros the Conqueror's various followers, a cult of magi known as the Hidden revealed that they had infiltrated the highest ranks of the Imperial government, including the Emperor's own private council. Their leader slew the current Emperor and trapped his soul inside of a gem, which he placed on his crown to show his domination over the material and the spiritual. From that point on, history would know him as the Mage-Emperor Ildrius.

Many of the local kings were killed at the same time by their mage advisors. Those who did not bend the knee were defeated on the battlefield by Imperial legions under their new, powerful mage leaders. Ildrius further strengthened his armies with summoned demons and ranks of undead raised from the battlefields to attack at night, and some sources say he even created necrogolems of terrible size to use as unliving siege engines. It was long long before all of Achaea had submitted, trembling, to his rule.

Under the shadow of Ildrius, local kings were slain or replaced by their mage advisors, who held the royal families hostage inside their castles while they ruled in their stead. Nearly all of Ildrius's followers were corrupt and evil, forcing the population to pay tribute in the form of bodies: living men and women taken prisoner in the castle to be used as test subjects in vile magical experiments, or simply to be killed and trapped in soulstones. Inquisitions were carried out to weed out dissent among the populace. Magi would torturously probe the minds of the local village leaders to ensure they were not thinking of rebellion. If they were, they were always executed in a horrible public display of magic, such as being forced to fight a summoned demon in the gladiator pits. 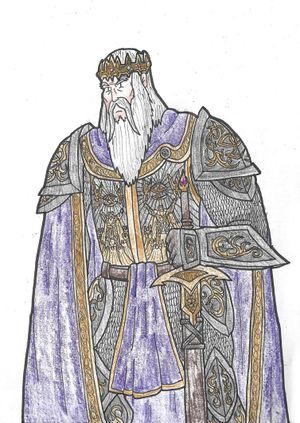 Ildrius, as he was speculated to look during the latter years of his reign. Artwork by Dalton Westmoore.

A sellsword known to history only as Durand was the first human to record the magic-absorbing properties of void iron ... and put it to good use. He painstakingly gathered a group of like-minded followers, as they pooled their wealth to buy enough void iron armor and weapons from the deep dwarves to arm themselves against Ildrius. With the help of some other rebels, they caused great trouble for the Mage-Emperor.

Eventually, in the year 269, Ildrius and his most powerful followers faced Durand and his allies in the field. The magi were shocked to find their spells ineffective against the adventurer and his black-armored knights. Durand himself cut off the Mage-Emperor's head and presented his crown to his most noble-born ally, who then became Emperor Severus I . Severus then dubbed the rebel Sir Durand du Vide ("of the Void"), leader of the Imperial Inquisition.

The Inquisition quickly began hunting down and slaughtering all magi in Achaea. Ildrius's followers got their just deserts, but many innocent magically-gifted individuals were also slain. Few protested the executions. The reign of the Mage-Emperor had spread a hatred of all things magic throughout Achaea, and the Hidden, who had been trusted advisors to kings before the rise of Ildrius, were reduced to hidding in caves and sewers, disguising themselves in the lowest possible ways to escape the black swords of the Inquisition.