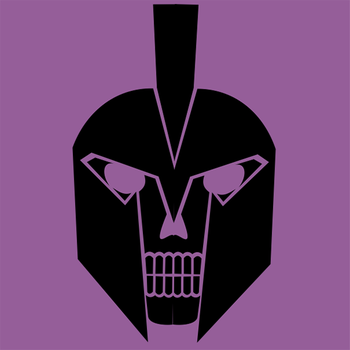 Emblem of the House of Plutarchus.

House Plutarch (or the House of Plutarchus, to use the full High Imperial style) is one of the oldest and wealthiest noble families in the Achaean Empire. Their seat is Pluton Hold.

The emblem of House Plutarch is a black (or sometimes silver) skull, wearing a helmet, on a purple background. The helmet is usually depicted in the style of an Old Achaean Hoplite, with a tall central crest. This is because it represents the magical helm of Pluto, also called Hades, the god of the Underworld, from which the house ultimately derives its name.

The motto of House Plutarch is "Virtus Emanat Abysso", or "Power Flows from the Deep", sometimes shortened to "Power Flows Deep." The motto refers to the origin of the name, discussed below.

House Plutarch gained their riches by mining gold from the Blackrock Foothills of the Jagged Edge mountains. They chose a name for their house that fit the source of their power, for "pluton" is an igneous rock, and "pluto" can also mean wealth, since the god Pluto is the wealthiest of all the gods, for gold is mined from beneath the earth, where his kingdom lies. They built their castle, Pluton Hold, from black volcanic rock atop a volcanic mound, into which they carved many underground vaults and coffers to store their riches.

House Plutarch was instrumental in the creation of the Achaean Empire. It was during a visit to Pluton Hold that the founders of the Empire, Exar I and his son Xandros the Conqueror of neighboring Coronaria, observed an army of dwarves of the Blackrock Foothills practicing drills. They based their own legions on the dwarves' tactics. During the founding years of the Achaean Empire, the Plutarchs provided funding for Coronaria to build up its mighty legions and wage war on the other city-states. Eventually, however, their gold mines started to run dry, and they began butting heads with the Blackrock dwarves, who laid claim to the deeper tunnels. Since then, though it maintains a few mines scattered through the Empire, House Plutarch has continued building its wealth through trade and influence.

The current head of House Plutarch is Lord Titus. His children are: