From Wulfgard Wiki
(Redirected from Gift)
Jump to: navigation, search

The term 'magic' is a loosely-defined one that can be used to refer to many different types of power accessible to mortals through various means. 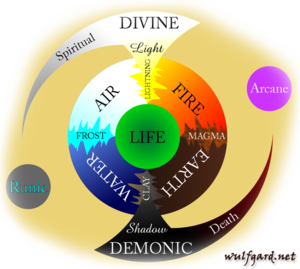 The Wheel of Magic.

There are six main types of "magic," each radically different - so different, in fact, that wielders of one type may refuse to acknowledge any similarity with another type. Priests, for example, would never refer to the power of their god as magic at all. But Magi of the Secret Council claim that all types of magic are interconnected, and they represent this connection with the Wheel of Magic seen to the right.

Arcane Magic and the Gift

These two types of magic can only be used by those with the Gift, the rare ability to tap into the power of other worlds. For Arcane and Elemental magic are strictly unnatural - they are not of the mortal realm (Midgard), but of other realms. Despite common belief, a mage or sorcerer cannot influence the natural world. He cannot make the rivers rise or the winds change course or a storm brew in the sky. He must summon his own water, wind, fire, and lightning from other realms through the use of spells. These elements come from the Elemental Realms and are called Elemental Magic. Other arcane spells are more mysterious in origin. It is not clear from whence their power comes. They are sometimes called Pure Arcane Magic.

For more information on this power and the nature of the Gift, see the Arcane Magic page.

These two types of magic are considered polar opposites, yet they are in many ways very similar. They are accessible to anyone, even if they lack the Gift, since they are granted to mortals by greater, more powerful beings living in other realms. To be granted this power, the mortal must gain the favor of said being. Priests gain the favor of a god by devoting their life to that god's service and performing holy actions, while those seeking demonic magic must gain the favor of a demon - a path that usually leads to dark and sinful acts. The path to divine power is slow and arduous, but promises eternal reward in the realm of one's god. The path to demonic power is a quick and easy one, but usually ends with eternal damnation in the realm of demons.

For more information, see the Divine and Demonic/Death Magic pages.

All things in Midgard are inhabited by spirits - even rocks, trees, and streams. Through intense spiritual meditation, mortals can communicate with these spirits and thus influence the world around them. In a way, this magic also involves another realm: the Spirit Realm. But unlike the Elemental Realms, the Spirit Realm exists parallel to the Mortal one and interacts with it constantly. Because the spirits of the dead linger there before passing to the afterlife, spiritual magic users can communicate with them as well. They often serve as priests for certain cultures, called shamans or druids.

Though all spells may be written as runes, true Runic Magic uses the writing of the Eldest Language - the Language of Creation - for its power. Few beings - if any - truly understand the language of these runes, and none at all can speak it aloud. Yet the power of the runes is undeniable. Runic magic can perform some of the most amazing feats of any magic type, causing objects to float in midair, creating doorways that lead instantly from one side of a nation to the other, and creating a mockery of living creatures from unliving matter.

Although Life is in the very center of the Wheel of Magic, it is not considered a Discipline of Magic, because it is utilized for healing purposes by a variety of spellcasters, including Priests, Shamans, and Druids. Life in the mortal realm is granted by the balanced combination of the four elements. By balancing these elements in the body (through warmth, liquids, food, etc.), a healer can cure ailments through non-magical means. This can also be done magically with healing spells, which can also aid in the regeneration of wounded living things. Life magic can never do harm, except to the undead.

There are many different types of magical fire, which can be utilized by powerful mages able to harness their energy. Magical fire is most commonly used by dragons.