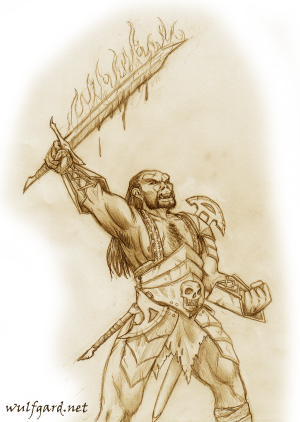 An orc warlord holds aloft a flaming blade, symbol of Surtur and the Armies of Chaos.
The Chaos Races are the creatures created by the Jötnar and Titans to oppose the races who served the Olympians, Aesir, and other deities in the mortal realm.

During the Titanomachy, the Titans and Jötnar began creating an army of mortal followers, which could serve them and do battle with the men, elves, dwarves, and other noble races that followed the other gods. However, because they lacked the art and power of those gods, and due to their purely chaotic, twisted nature, the giants' creations were hideous and imperfect monsters. Nevertheless, they were found to be satisfyingly strong and able fighters with a furious bloodlust and a taste for human flesh.

Since the Titans and Giants are not demons and not pure evil, neither are their creations. As their name implies, the chaos races are creatures of chaos rather than evil. They are not malevolent simply for the sake of being malevolent, but for their own advantage. They stab their own chieftains in the back to rise through the ranks, and burn villages as a show of their great strength, which they value above all else. Strength is their defining attribute, the one area in which they are superior to the nobler races - the average orc is far stronger than the average man.

The chaos races are not destroyed by sunlight or holy power, although they do despise the nobler gods and prefer to operate in darkness rather than the day. Many of them prefer to live in caves, and their eyes are sensitive to bright sunlight. Each chaos race is a dark mockery of the noble race they were created to oppose: orcs are based on men, hobgoblins on elves, goblins on dwarves, chaos beasts on beastfolk, and ogres either on trolls or the giants themselves - their basis is not known for certain.

Possessing sharp teeth and pronounced canines (especially the lower ones, for nearly all have a natural underbite), all chaos races are almost purely carnivorous, especially preferring the taste of men, elves, dwarves, and beastfolk. They never eat plants except as meat seasoning or an alcoholic mixture. They are known to brew an especially foul type of alcohol they call "poj-poj," but which other races call simply "orc grog" or "black bile." The exact formula is known only to the chaos races, and may vary from tribe to tribe. Despite its disgusting taste, it is highly nutritious to the chaos races themselves, who can live off it for months when meat is scarce.

The chaos races are sexless. All individuals are "male," yet they cannot copulate. They reproduce through the creation of breeding pits. Every member of the chaos races knows innately how to fashion one and what ingredients to mix into the concoction that fills it. The strongest members of the tribe then perform a dark ritual and some of their blood to the pit. After a period of time, newborn individuals will arise from the pit, the size and strength of fully-grown adults. The breeding pits are powered by some type of dark magic that only the chaos races can perform. Interbreeding is impossible - if an orc, a goblin, and a human all added their blood to a single pit, only orcs and goblins would be spawned. However, the strength of these new spawn is believed to be increased by the strength of the individuals who add their blood to the mixture, and the blood of the noble races is considered to be even stronger. If a particularly strong man, elf, dwarf, or beastman is captured alive - and if the chaos races can resist simply eating them - then they will be kept in a cage and bled regularly to contribute to the strength of the pit. Much like with vampirism, only the blood of the living will work. It may take up to a year for a batch of newborns to arise from the pit, and the number of new spawn is mostly random, though bigger pits can spawn more newborns.

Due to their chaotic nature, all of the Chaos Races are naturally violent and resistant to authority. They despise laws, fall to squabbling easily, and only respect leadership through strength. Whenever multiple Chaos Races live together in one place, the larger ones nearly always dominate the smaller, with giants always ruling over all others. Ogres are the only exception to this rule, because many ogres are too stupid to lead, and may even be used as dumb beasts of war and burden by cleverer orc chieftains.

The Armies of Chaos

The vast majority of the chaos race population are thought to live deep in the mountains of the Jagged Edge and in the land the giants call Jötunheim, where they exist as slaves to their creators. There are also many tribes along the borders of the mountains who serve the Jötnar and zealously worship the greatest ones - like Surt - as gods. These orcs are all part of Surt's plan to someday lead an attack on the noble gods and their creations, to kill them and bring about the Ragnarök. Thus, they are collectively called the Army of Chaos, fighting under the banner of Surt's flaming sword. As their name implies, they have little in the way of central leadership. Many tribes simply worship the giants on the promise of someday being part of their great plan, while the giants themselves do not even realize they exist. Those chaos race groups whom the giants more directly control - such as the fortress-cities of Dhuum and Syflage - exist only to make war on the noble races and capture them in order to breed stronger monsters.

As creatures of chaos, however, not all chaos race tribes follow Surt and the Jötnar. Many live an independent existence, raiding for their livelihood, and constructing their own villages and breeding pits. Only the strongest of the tribe - and thus, the leaders - are allowed to contribute blood to the breeding pit. Since they have no greater plan for world conquest in mind, these tribes may shun the practice of capturing noble races to add their blood to the pits. Their leaders often consider themselves stronger than any man or elf, and thus believe "noble" blood is unworthy of adding to the pit. This belief forms something of a bond between members of the tribe, since they know they share the same blood and were born from the same pit. Despite their beliefs, however, the orcs of independent tribes are seldom as powerful as those selectively bred by the Jötnar. They are also stupid, and without giants to instruct them, their civilizations never advance enough to construct large towns or cities. Whenever a tribe gets too big, a civil war usually erupts to split it apart. Such is the way of chaos.

A list of the chaos races can be found in Category:Chaos Races, with articles providing more details about each.