From Wulfgard Wiki
(Redirected from Beastman)
Jump to: navigation, search 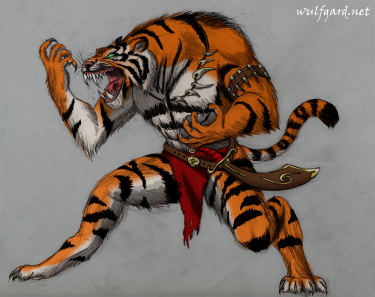 A tiger felesian.
Beastfolk are intelligent humanoids whose physical appearance combines features of a man and an animal. They are descendants of the Shifters, cursed in a forgotten age to lose their shapeshifting power and remain forever in a half-man, half-beast state.

Beastfolk were created - alongside the lycanthropes, vampires, and other shifter-kin - when the Age of Wulfgard ended. Unlike those other monsters, however, beastfolk entirely lost the ability to shapeshift, and they are permanently stuck in their beast-man state. The vast majority of Shifter races became beastfolk. Some are an even blend of human and animal features, while others, like the centaur, are literally half and half, with the upper body of a man fused to the lower body of a beast. All beastfolk are intelligent and capable of speech, and some have been known to learn the languages of men and elves in order to communicate with them. Like all other intelligent mortal creatures, some beastfolk are born with the Gift. Also, due to their unusual and inhuman nature brought on by the curse, they cannot interbreed with Men, elves, dwarves, or any other race, unlike the Shifters of old.

There are countless different types of beastfolk spread across Midgard, even some that live in such secluded areas that they are all but unknown to humans. Every beastfolk race originates from the animal that their ancient Shifter ancestors once turned into. Generally, different races of beastfolk cannot interbreed.