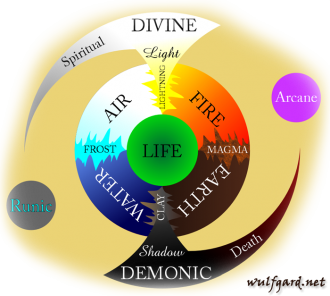 The Wheel of Elements, representing the combination of elements which make Life possible, as well as the different types of magic.

The theory of elemental affinity, which is related to Humorism or the Theory of Humors, refers to the belief that all creatures, whether magically gifted or not, are born with an affinity to a particular Elements. A person's innate elemental affinity can be impossible to determine, especially for a non-mage, but it usually affects their everyday life in slight ways, influencing their personality and their preference of environment.

According to believers in the theory of elemental affinity, one's affinity can affect their personality, environmental preferences, and more. For instance, individuals of Air affinity tend to be free spirits and slightly whimsical, while those of Fire affinity are often temperamental and passionate. Someone of Water affinity might prefer a life at sea or near the shore, while avoiding particularly dry environments. When they find themselves in an environment counter to their elemental affinity, a person might feel unwell and out of sorts - "out of their element," one might say. This applies doubly for magi, who find their spells considerably weaker and more difficult to cast in an environment that contests their affinity. However, not everyone who lives in the desert is of Fire affinity, nor is everyone on the sea of Water affinity - and likewise, not every hotheaded man or woman is Fire affinity.

Some people are more strongly affected by affinity than others. They are sometimes said to have been born on the fringes of the Elemental Wheel, greatly favoring their element over all others and despising their opposite element. Those less strongly affected are considered to be more in balance. A person considered out of balance may be brought in balance by exposing them to their opposite element or by balancing the humors through medicine.

Fire is associated with the Choleric humor. An individual with Fire affinity is usually passionate, hot-tempered, obsessive, and dominant. They can be argumentative and impatient but excellent leaders, especially in an emergency. They prefer to live in warm, arid environments and work with fire-related professions such as cooking or smithing. They are weak to water and hate being submerged or traveling at sea. Their opposite affinity is water, and fire magi have difficulty with water and ice magic.

Earth is associated with the Phlegmatic humor. An individual with Earth affinity is usually calm, content, rational, and diplomatic. They can also be shy, stubborn, fearful of change, and sometimes apathetic. They are adapted to living in rocky landscapes, fields, or even underground, and they tend to enjoy careers working with the land, such as farming and mining. They are weakest when they are away from solid land, such as out at sea or at a high altitude. Their opposite affinity is air, and earth magi have difficulty with wind and lightning magic.

Water is associated with the Melancholic humor. An individual with Water affinity is usually thoughtful, cautious, well-organized, and creative. But they can also be obsessive, overly cautious, prone to moodiness and depression, and frequently discontent. They are adapted to living in humid environments and at sea. They are weakest in dry environments, such as deserts. They enjoy life as sailors and fishermen. Their opposite affinity is fire, and water magi have difficulty casting fire spells.

Air is associated with the Sanguine humor. An individual with Air affinity is usually highly sociable, confident, spontaneous, and free-spirited. But they can also be impulsive, flighty, unreliable, and claustrophobic. They are adapted to living in open environments not closed off from the sky, such as open plains, mountaintops, or at sea. They are weakest when cut off from the open air, such as when underground, imprisoned, or underwater. Their opposite affinity is earth, and air magi have the greatest difficulty casting earth and poison spells.

Many individuals display a mixture of traits from two closely-aligned affinities, causing them to fall somewhere in-between two basic affinities on the wheel of elements. They can be categorized as the following:

An individual with Lightning affinity walks between those of Air and Fire affinities. They display the free-spirited and temperamental attitudes of both, making them highly volatile. They prefer living in warm, open-air environments. Their opposite affinity is clay.

An individual with Magma affinity walks between those of Fire and Earth affinities. They tend to be calm and quiet most of the time but can erupt with furious passion when provoked. They are adapted to living in warm environments close to land, especially near volcanoes. Their opposite affinity is frost or ice.

An individual with Clay affinity walks between those of Water and Earth affinities. They are usually content and calm but can sink into deep moods when made to doubt their beliefs. They are adapted to living in very humid environments and wetlands. Their opposite affinity is lightning.

An individual with Frost or Ice affinity walks between those of Water and Air affinities. As one might expect, they tend to have very cold personalities and prefer living in cold environments such as the far north and high altitudes. Their opposite affinity is magma.

Little is known about the Light and Shadow affinities, because they are thought to be exceedingly rare, almost never seen in any mortal creature except under very special circumstances.

Often seen as a holy affinity, many saints and heroes are considered to be of Light (sometimes called Aether) affinity. They are considered to be brave, selfless, and noble, but also judgmental, self-righteous, and sometimes arrogant. Those rare individuals born to the Light prefer daytime and clear skies, as well as bright fires, and they hate or fear darkness. Light magi can summon beams of intense light and heat, are naturally talented with divine magic, and may find it impossible to use shadow magic.

Often viewed as an unholy or even demonic affinity, those with Darkness or Void affinity are often shunned and driven into hiding. Their personality tends to be similar to the Melancholy of Water affinity - thoughtful and creative but moody and plagued by dark thoughts. They are often antisocial loners who find it difficult to relate to other people. They prefer nighttime, dark places, the color black, and they hate bright light, bright colors, and exposure. Shadow magi can summon pure darkness to blot out the light and are naturally talented in black magic, and they may find it nearly impossible to cast light or divine spells, unless favored by a darker, chthonic deity.